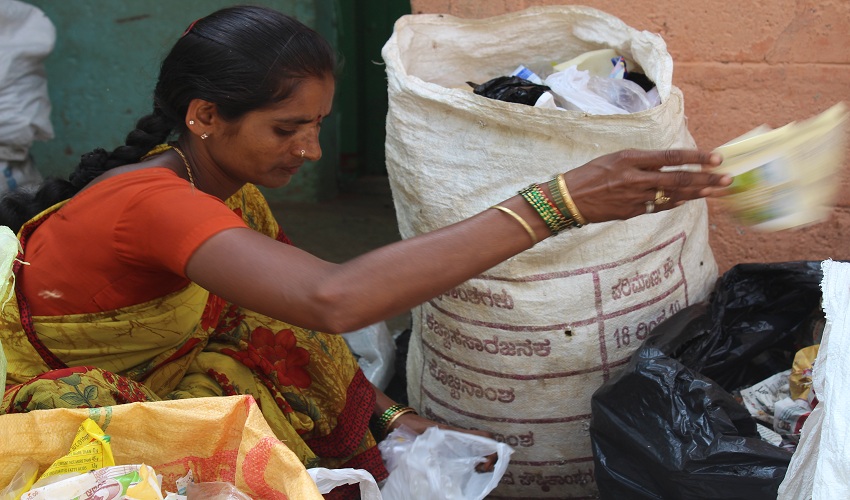 Today as environmental degradation and its consequences becomes a more pressing issue for our society as a whole and consciousness as denizens of this planet becomes an imperative; we see a commodification of the environmental movement where – debate has lost its nuance, actions are split into good/bad binaries, and trendy words such as zero waste and circular economy are vogue and bandied about callously even though their promises are half fulfilled.

While there is a reductionist argument that these environmental issues need to be watered down in order to raise awareness and reach a mass audience the larger issue is that the environmental movement has been appropriated by the elite for their public relations efforts and this same movement has ignored arguably its greatest contributor –  the anonymous waste-picker.

Aluminium, cardboard, and PET are materials that are used and disposed of by millions without a second thought, but for the 35,000 waste-pickers of Bangalore, these materials are their entire livelihood, their next meal depends on the amount they are able to collect, consolidate and send to the intermediate buyer – they are in essence the foot-soldiers of a vast informal recycling economy.

The average waste-picker is a free-roaming waste-picker who collects or picks waste daily. There is a higher chance that our average waste picker is female and is between the ages of 20-40, she earns between 100-200 Rupees per day, in recent times urban migration has increased the number of men picking waste because picking waste has the least entry barrier. These statistics however barely scrape the surface due to the labour intensity of their occupation and their poverty, waste pickers suffer from poor nutrition they are also more susceptible to sickness and infectious diseases.

Environmental movements including sustainable waste management movements are only going to gain more traction over time. While words like circular economy enter our common parlance and celebrities holding steel straws enter our social media feeds let us not forget the real face of recycling and the sustainability movement – the anonymous waste-picker or silent environmentalists as they like to be called.